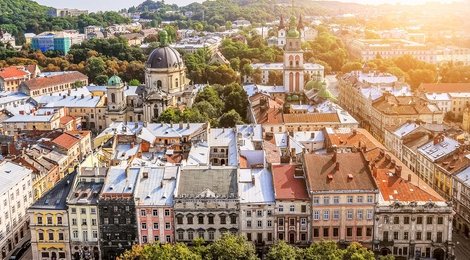 Lvivis a city in Western Ukraine, the administrative center of the Lviv region, a cultural, educational, scientific, and tourist center of the country, a major industrial center and a transport hub.
The population of Lviv is about 728,000.
Archaeological research confirms that settlements on the site of the present Lviv existed since the 5th century AD. In the 10th century, Kievan Rus and Poland began to spread their influence over these lands. The first mention of Lviv dates back to 1256. The town was historically the main center of Galicia, a region divided between Ukraine and Poland today.
hroughout its history, Lviv has never been renamed. With regard to Lviv, you can hear a variety of epithets, the most famous of which are: “The City of the Lion” or “The City of Lions”, “The Royal City”, “The Pearl of the Crown of Europe”, “City-Museum”, “The Capital of Galicia”, “Little Paris” , “Little Vienna”, “Ukrainian Piedmont”, “cultural capital of Ukraine” and others.
Lviv is located in the central part of the Lviv region, about 600 km west of Kyiv and 70 km from the border with Poland. The climate in Lviv is moderately continental, humid. The average temperature in January is minus 3 degrees Celsius, in July - plus 19.5 degrees Celsius.