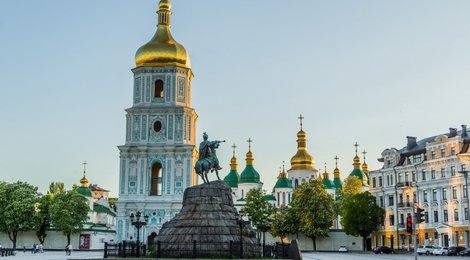 Kyiv the capital and largest city of Ukraine with - officially - approximately 3 million inhabitants (unofficially up to 4 million inhabitants). The city was founded on the banks of Dnipro River.
Kyiv is one of the oldest cities in Eastern Europe, dating back to the 5th century, although settlements at this location existed much earlier. By the late 9th century, Kyiv had become the de facto capital of an emerging Eastern Slavic state. Between the 10th and early 13th centuries, the city reached its golden age as the capital of the first Ukrainian state known today as Kyivan Rus.
In 1775, Kyiv was annexed by the Russian Empire. The city remained under Russian rule, with brief but uncertain periods of independence between 1918 and 1920. Over these two centuries, Kyiv experienced growing Russification and Russian immigration. After the collapse of the Soviet Union in 1991, it became the capital of independent Ukraine and is now discovering its place as a large European capital.
It is generally acknowledged that the population is over 3,000,000 (2006 estimates). About 85% claim Ukrainian ethnicity and about 12% Russian. However, the census numbers are believed to be unreliable so these percentages must be taken with a pinch of salt. There are many minorities in the city, including Armenians, Azeris, Belarussians, Jewish, Georgians, Polish, Romanians and Tatars. Since 2001, not only has the population of Kyiv increased, but also the percentage of people claiming Ukrainian ethnicity.
Kyiv has a humid continental climate like the rest of Eastern Europe. Despite being at the same latitude as Prague and Paris, Kiev has much colder winters due to the heavy influence from Siberia. Temperatures usually remain below or around freezing all day and during the night they get below -5°C (23°F). The mercury can occasionally dip to -15°C (5°F) when strong cold waves hit and, in rarer cases, below -20°C (-4°F). The record low is -33°C (-27°F). Keep in mind that it may feel much colder due to the high humidity (83% in January). Snow cover usually lasts from late November to late March but it can start and end earlier or later.